Mathematics and Language through the use of ICT

SPIDER research was carried out simultaneously with implementation the project Mathematics and Language through the use of ICT4D in the Municipality of Uncía, Northern Potosí, Bolivia. Implementing partner is Vision Mondial and research was conducted by researchers at Universidad Católica Boliviana (UCB). The research looked at the perceptions of teachers and students on the use of ICT for mathematics and language learning in Eduardo Avaroa, Juana Azurduy de Padilla and Modesto Omiste elementary schools. Data was collected through 10 classroom observations and interviews with teachers between February and October 2018. Observations were made during ICT lessons for 1st to 6th grade students, and teacher trainings.

Teacher Training and Use of ICT

The research found that use of ICT in classrooms has enabled teachers to help students achieve competences in linguistics and processing of information independently. Teachers were trained on numerous computer applications and tools used for teaching in elementary schools for example Mundo Primaria, Audio Books and GeoGebra for teaching algebra, geography, dynamic geometry, statistics and calculus. Each teacher is provided with a laptop from the government and has the opportunity to go through two trainings. During the project implementation the first training was conducted by the school in 2017 and the second by Vision Mondial in 2018. The teacher trainings were also complemented with two courses of the UNEFCO (Unidad Especializada de Formación Continua), a unit at the Ministry of Education of Bolivia specialized in continuing education. These two courses were attended voluntarily by about 40% of the teachers. 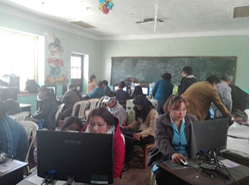 Despite the ICT training given to teachers, they still lacked the necessary pedagogical skills for teaching using ICT. They also lacked support and time to practice computer use on their own. In one of the observed lessons at Eduardo Avaroa elementary school, the observer noted that “the course teacher and the computer teacher were present. None of them had the software they tried to teach installed on their personal computers, and they confirm that they did not previously plan for the class”. The director of Eduardo Avaroa stated during an interview that teachers work only 3 days a week at the school, “it is difficult for the teachers to spend time training or planning outside school time because it is those 3 days that they have to do all their including use of the ICT classroom”. The director of Modesto Omiste School was also interviewed and, in his opinion, “trainings did not address the practice and examples of how teachers should apply their project in classroom”. He further explained that teachers are trained without taking into consideration the differences in the level of computer knowledge. In his school [Modesto Omiste] teachers resisted to use ICT. They[teachers] complained to the teachers’ union leadership and they reached an agreement with the Directorate of Education of the district to make use of ICT in classrooms voluntary and not compulsory. SPIDER research found that this was an issue of readiness, teachers who received training and felt more confident in use of computers were compliant. But other factors such as lack of internet in for example Juana Azurduy de Padilla school affected teachers in terms limited access to online material that can be used for self-learning. 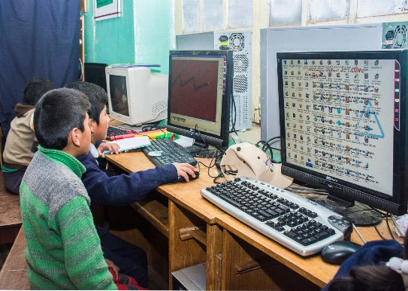 Students use of ICT

The research shows that pupils were often excited about using computers in their lessons and they could practice and learn on their own. However, they also get discouraged during some of the class activities. The observations pined this finding on the lack of proper pedagogical instructions and computer skills. One of the interviewees (a teacher) stated that “students still have several flaws in how to use a computer, and they consider it as a tool to play and not to learn. They do not know how to use the keyboard. Since their practice is more focused on the use of certain keys and the mouse for the games”. Computer programs that have games for learning were more likeable. The same teacher has found computer programs for teaching the 1st, 2nd and 3rd graders to recognition letters, numbers and drawings. He also found use of dictionaries to search words and play games to be more attractive to the pupils.

The ICT lessons in schools are few. Students have a few hours on computers especially during lessons and this affects those who are from households with limited economic resources. In Modesto Omiste school for example, it was observed that pupils who have computers at home are more proficient at using them. To bridge the skills gap, plans to create permanent classroom that assists with ICT tools are underway.

Use of ICT in Eduardo Avaroa, Juana Azurduy de Padilla and Modesto Omiste elementary schools has brought new experiences to some teachers. According to one of the respondents, “Students who used to dislike mathematics now they like it”. Some teachers suggest that ICT should not only be used for language and mathematics learning but also for learning life sciences. Training of teachers, technical and administrative support as well as support from parents are perceived to lead to positive outcomes.